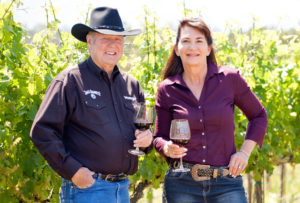 It all began several decades past, when a young man by the name of Michael Crowley was raised in the heart of the Bluegrass Country in Lexington, Kentucky, son of a pharmacist who doubled as a consultant to great horse trainers and breeders alike. Young Mike spent countless hours growing up around the likes of horse racing’s most elite equine athletes and so his love and passion of these majestic beasts began. Little did Mike know that on the West Coast, in Southern California in the town of Arcadia, a young girl lived just blocks away from “The Great Race Place” Santa Anita Race Track and her passion too was her deep and profound love of all things horse! As Mike later became involved in Pharmaceutical Sales after college, he had the opportunity to live all over the world…Helsinki, the UK, Israel and France…where he fell in love with his other life’s passion…an affair of the heart with the elixir of the God’s, fine and formidable wines. Mike spent a fair amount of time in the Bordeaux region of France where he cultivated his palate for the refined wines of the appellation. In Bordeaux the concept of “terroir” plays a pivotal role in wine production with the top estates aiming to make “terroir” driven wines that reflect the place they are from, often from grapes collected from a single vineyard. The soil of Bordeaux is composed of gravel, sandy loam and clay. The region’s best vineyards are located on the well-drained gravel soils that are frequently found near the Gironde River. An old adage in Bordeaux is that the best estates can “see the river” from their vineyards. The majority of land facing riverward is occupied by the finest wine producing estates in the region.

While Mike was in France cultivating his passion for Bordeaux varietals, Peg was pursuing her interests in the equine world and developing a love of estate Cabernets primarily from her travels throughout California in Napa-Sonoma, Paso Robles and the Santa Ynez wine regions. 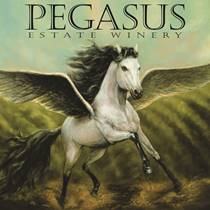 Fast forward many decades when these two horse and wine loving free-spirited singles bumped into each other and immediately began sharing their interests about their passions and had their first date at an upscale wine tasting in Del Mar, CA. Not long thereafter the two became engaged and married and they formed a biotech company based upon their past experiences in sales and pharmaceuticals. But they always explored their passions when time permitted by traveling primarily to the Central Coast on wine pilgrimages and on occasion to France & Napa to continue to refine their palates and explore the possibility of one day realizing their dream to produce a very special and unique wine under their own label.

After searching for just the right plot of land in the Santa Ynez Valley, Peg and Mike’s plans to develop an elaborate equestrian center and a winery finally came about and PEGASUS Estate Winery was born. Peg and Mike sought to obtain land similar to the wine growing regions in Bordeaux and when they found a hillside sloped location, rich fertile soil as the site of a former cattle ranch operation for 100 years prior to their arrival, facing all of the afternoon sun and protected from the winds, with a terroir composed of sandy loam with areas of gravel and clay, overlooking a beautiful flowing creek, they knew that they had reached Mecca! Similar to the best vineyards in Bordeaux, they began to create their equestrian center and vineyard as they acquired the very finest of root stock compatible to the growing conditions to achieve a single vineyard estate grown Cabernet Sauvignon.